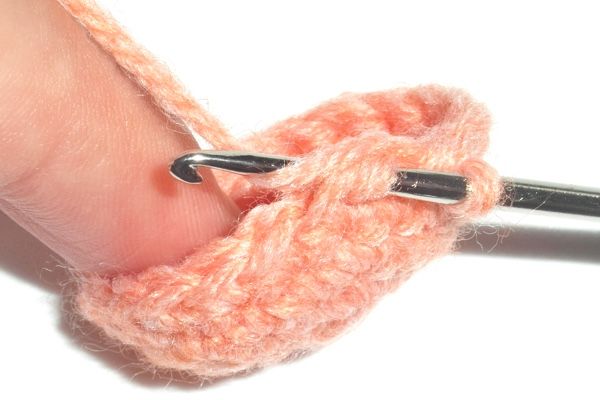 Let’s start learning the basic stitches we must crochet to give life to our amigurumis:

It is the basic stitch par excellence and give rise to many of our creations.

It consists of forming a slipknot that, as its name indicates, “we will chain” several times until we achieve the length that we are interested in obtaining.

In my amigurumi patterns you can find it to start the fabric in straight, or form various elements such as thick eyebrows, hair strands, horns, etc.

In this video you can see how it’s done:

This stitch gives rise to most amigurumis.

Note: The ideal is to find the most comfortable way to do it, because a priori the theory may seem complicated, when in practice there is no difficulty.

You will find several variants of how to make magic ring.

It involves twisting the thread on the index finger.

1.- Hold the end of the thread with the thumb and middle finger of the left hand and place it on the index finger, surround it and overlap the long side on the short one forming an X on the finger.

2.- We take the hook with the right hand and pass it below the upper right part of the X to lift it, engage the left part and pass it underneath.

We have thus the thread in the hook ready to crochet on it a chain taking the long end.

This chain will serve to fasten the thread in the form of a ring.

Let’s look at its form for a moment: Half of our ring has two threads (the short thread rolled up over the one that forms the ring), while the other half has just one thread.

3.- After the fastening chain, crochet single crochets in the double half, taking the two threads at the same time.

We will make as many stitches as indicated by the pattern (normally 6) and then close the ring.

4.- Close the ring: we must pull the short thread to close the hole and complete the ring with a slip stitch over the first single crochet.

WATCH OUT: We must not confuse the first single crochet with the fastening chain. To make sure, we simply have to count the stitches from the hook back to the start. In this way we will not be wrong.

As I said, this is my particular way of doing magic ring and you can find it in my amigurumi patterns to start most of the pieces.

You will see them in different sizes, from the largest of 12 single crochets, the medium ones of 8, to the most common ones of 6 and the small ones of 4.

Other uses that we can give it are:

Here’s a video example of how to make the magic ring:

Together with the chain is the basic stitch when crocheting amigurumis. We use it for everything, but yes, never in isolation, that is, the single crochet is always crocheted on another stitch.

Let’s see how to crochet it:

Through Half double crochet we will win high and wide in our fabric.

It is a modification of the single crochet.

With one thread already in the hook, instead of introducing it into the weave as in the single crochet, what we will do is take another thread around the hook.

Already with the two threads placed on the hook we introduce it in the fabric and we take the yarn obtaining 3 threads, we take again the yarn and introduce it on the three threads at the same time, remaining in the hook only one.

Both this stitch and the next, the double crochet, serve to increase both the height and the width of our fabric, especially if we crochet several only on one stitch. You will find it in my patterns to form waves, for example in dress collars.

The double crochet is a variant of the previous stitch and I personally like it more.

It is done in the same way, but it differs from the half double crochet in its completion, increasing it in one step.

Finish then crocheting a single crochet, that is, taking up the yarn and introducing it into both threads to have one at the end.

A third variant I use very little is TREBLE CROCHET:

It differs from the double crochet both in its beginning and in its completion.

Having one thread in the hook, instead of taking another one from the yarn, what we do is take two, that is, we twist the yarn twice in the hook.

Now we can introduce the hookin the stitch, take the yarn and remove it again by the stitch, obtaining 4 threads in the hook.

We only have to finish the stitch. If we made two steps for the double crochet, in the treble crochet we will do it in three steps.

The Treble crochet will make us gain even more height, with the disadvantage from my point of view of giving rise to a separation between the stitches that limits its use and prevents its filling.

It is the minimum stitch. With it we move on the stitches, make them more compact and we do not gain height.

Its most characteristic use is in the closing of the magic Ring. You can find it in my patterns for example to form edges, finish a piece or close it joining two rows of stitches.

Now that you know the basic stitches, let’s see how to use them: